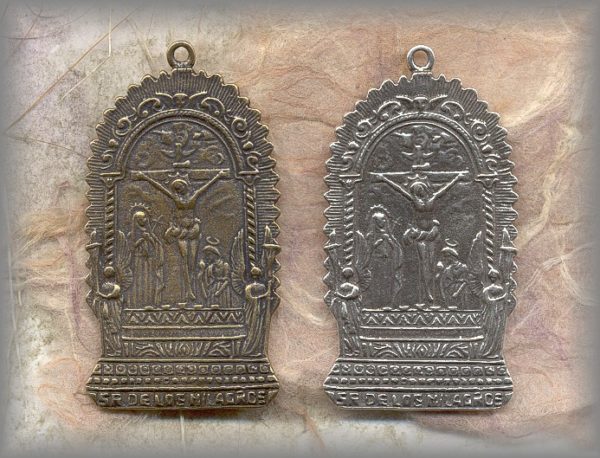 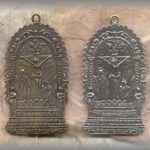 LARGE LORD OF MIRACLES: Se?or de los Milagros (the Lord of Miracles) is the patron saint of Lima. Every October for over 350 years, there is a major celebration including nearly 2 million people who celebrate in a procession that includes this enormous image shaped like the medal shown here. It is carried on the shoulders of the cargadores, or “carriers”, an esoteric brotherhood charged with transporting the heavy statue. Dancing, incense, music and chanting are all a part of this remarkable event along with special foods. Purple is the color of the participants which includes those who have received a miracle, who will wear the color for up to a year in thanksgiving.

350 YEARS OF HISTORY – EARTHQUAKES, ETC. Certainly a beautiful medal for today on an earth that suffers overwhelming earthquakes, tsunamis, hurricanes, tornadoes and other unexpected brutal changes in weather patterns. THE STORY OF THE EARTHQUAKE: In 1651 a picture of a colored Jesus Christ crucified was painted on a wall by an Angolan slave. Four years later on Nov 13, 1655, an earthquake struck Lima. Most of the city was leveled, but that image painted on the wall of Jesus was undamaged. It’s believed that this image has been the occasion of many miracles. People believe that the closer they get to the image, the better chance of getting their miracle granted.