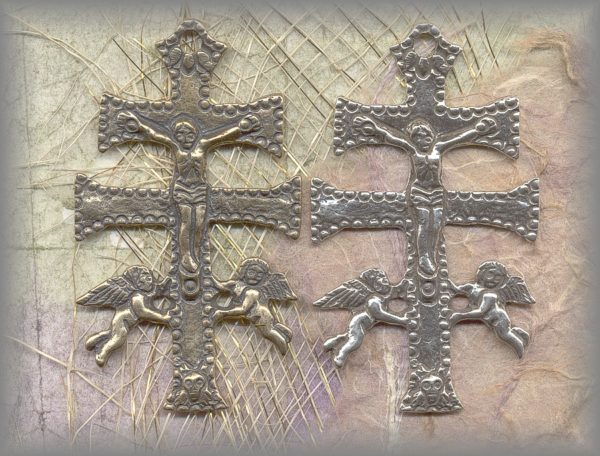 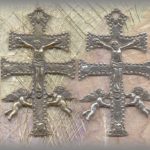 LARGE TRADITIONAL CARAVACA CRUCIFX: A very interesting crucifix with two bars and angels below holding it up. Crucified Christ is on the cross. Surface etched for a wonderful texture.

(SEE ALSO: ECRX.656 – SM CARAVACA, which is Double Sided, Crucified Christ on one side, and Our Lady on the other.) http://ait.devops.design/domains/wp/rosaryworkshop2/product/sm-traditional-caravaca-crucifix-double-sided-antique-latin-america-19c-2-in-ecrx-656/

Part of our Equatoria Collection.

MIRACLE OF THE CARA VACA CRUCIFIX
In 1231, a priest, who was imprisoned during the occupation of the Moors, was told to celebrate the Mass by his curious captors. After starting, he realized that there was no cross, which was required. The Moors became angry but the priest was saved because through an open window, two angels brought the Pectoral Cross of the Patriach of Jerusalem so the Mass could continue. Seeing this, King Abu Zeid who had directed the Mass be said, converted to the true religion. This miracle took place in Cara Vaca Spain.

ABOUT OUR MEDALS: All medals on our site are hand cast in sterling silver or solid bronze from antiques and vintage pieces then antiqued to restore original patina.