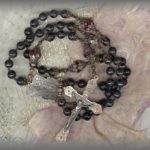 WHO WAS JOSEMARIA ESCRIVA? (9 January 1902 – 26 June 1975); was a Roman Catholic priest from Spain who founded Opus Dei, an organization of laypeople and priests dedicated to the teaching that everyone is called to holiness and that ordinary life is a path to sanctity. He studied in Zaragoza, ordained as deacon (20 December 1924), and ordained a priest, also in Zaragoza, (28 March 1925). Canonized in 2002 by Pope John Paul II, who declared Saint Josemaria should be “counted among the great witnesses of Christianity”.

OPUS DEI (WORK OF GOD): ST Josemaria: Opus Dei founder: teaches that everyone is called to holiness and that ordinary life is a path to sanctity. Founded in Spain in 1928. Opus Dei was given final Catholic Church approval in 1950 by Pope Pius XII. Mostly Lay people who live in their own homes. Membership, over 93,100 (2014) worldwide.

PRICING SUBJECT TO CHANGE WITHOUT NOTICE (pricing determined by gram wt of precious metals at time of casting) Unable to replace as shown.